Reduce, reuse, recycle.  The three Rs have been the mantra of ecological thinking almost as long as our concept of sustainability has existed.  According to BIOFerm Energy Systems, it’s time to add a fourth R – resource.

The international BIOFerm provides clean renewable energy solutions by designing and constructing biogas plants to recover energy from organic waste and biomass.  Originally conceived as a way for farmers to recoup losses from excess crops, a BIOFerm biogas plant can serve anyone that creates 6,000 tons of organic waste in a year.  Not just farms.  According to Caroline Chappell of BIOFerm USA, a biogas plant “could be based at a university, a composting facility, a food processor – any producer of organic waste who is looking for alternatives to the landfill.”

To read more go to:     http://www.worldgreen.org/home/wg-feature-articles/5821-rethinking-resources.html

Just imagine if computer batteries were more efficient. Read this article and see what you think….

What if your laptop no longer needed a converter brick? What if the DC power from your solar panels was converted to AC electricity with virtually no power loss from the conversion? What if the regenerative brakes in electric drive vehicles could put power into the batteries with almost no loss from power conversion? New technology could reduce power conversion losses by an estimated 90 percent.

A company called Transphorm, whose investors include Google Ventures and Kleiner Perkins and which was recipient of a significant ARPA-E grant to develop this technology, is poised to introduce their initial product offerings which can significantly improve power conversion. The technology is based on using gallium nitride instead of traditional components to greatly reduce the energy losses in power conversion.

The technology for these new devices is based on developments for the use of gallium nitride for LEDs. In addition to the significant improvement in efficiency, components made in this fashion would also be lighter than conventional converters.

Don’t keep the refrigerator door open any longer than you need to and avoid the cold air from flowing out the door. 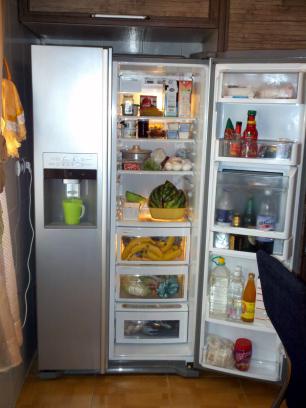 The next time you find yourself craving a mid-afternoon snack, make some time to think about what your stomach is asking for before you open the fridge door and stare mindlessly at its contents. The food inside isn’t going anywhere and I doubt that anything new will appear in the time it takes you to mentally fix a snack. However, every time you open the refrigerator door, the cold air that keeps your food fresh is running out the door and the warm air from the room is taking its place. This is a problem because now your refrigerator’s compressor is going to work hard to drive all that warm air out and bring the temperature back to normal, elevating not only your monthly energy bills, but also your environmental footprint.

According to Home Energy Magazine, door openings account for 7% of your fridge energy use while the Institute of Food and Agricultural Sciences at the University of Florida says that poor open/close habits (like leaving the fridge door open while you soak your bowl of Frosted Mini-Wheats with milk) waste 50 to 120kWh a year. In the long run, 50kWh of energy saved could run your dishwasher 20 times and 100kWh could run your washing machine 50 times, that’s almost a free load of laundry every week for an entire year.

So close the fridge door every time you’re not directly taking something out of it instead of daydreaming with the door open. Remember, it’s not a TV, even if you’re into super foods these days, your vegetables are not ready to entertain you with an improvised musical skit.

This is something I hadn’t really thought about, but it makes good sense.

A clothes washer is a wonderful machine. Throw in dirty clothes, add some detergent, turn a dial and come back later to clean clothes. Ever wonder where all that dirt goes? Most of it rushes away with the drain water; but some lurks in your machine and can cause laundry to appear dull and gray.

Using the bleach and vinegar will clean away bacteria, soap scum and mineral deposits from the wash basket and hoses. This is especially important if you live in a hard water area and should be done every three months. Every washer should be cleaned at least twice per year.

Protect your dark clothes from damage by following these simple rules: 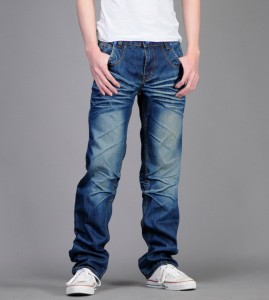 First determine if the garment really needs washing or can be worn again. Every wash does a bit of damage. Never wash light colored clothing with dark items. Lint from cotton items will often adhere to dark items making them look “fuzzy”.
Posted by Janice B → March 14, 2011 at 6:42 PM under Home Living Tips

With the threat of rising fuel costs perhaps these scooters are the way of the future.

The Suzuki Burgman Fuel Cell Scooter, created in collaboration with Intelligent Energy, a UK-based fuel cell company, has become the world’s first fuel cell vehicle that is about to be approved for mass commercialization. The company also said that the scooter and its components will be produced and sold in Europe.

The Suzuki Burgman scooter has been unveiled in Europe at a London City Hall event last month. It is equipped with the latest version of Intelligent Energy’s air-cooled hydrogen fuel cell system.

“Our aim is to make eco-friendly fuel cell scooters increasingly common in Europe, in line with the establishment of hydrogen filling stations and other necessary infrastructure,” he added.

A fuel cell-powered scooter looks promising, but how about the hydrogen infrastructure, indispensable for normal operation? Well, in countries like Italy or Germany you’ll be able, also soon, to charge your EV or hydrogen vehicle from roadside points, where the energy will come from solar panels.

Here is some useful information to keep your precious heirloom linens in good shape.

Always launder or dry clean linens before storing. Some stains may not be visible but can provide food for mildew or insects. Take care to rinse thoroughly to remove all detergent which can cause discoloration. Be sure that your linens are completely dry – especially after ironing – before you store them. Moisture creates mildew.

Place heavier pieces like place mats on the bottom, then solid tablecloths and napkins and place lace pieces on top of the stack. It is better to store linens unironed because starch can attract insects and any crisp creases can weaken fibers.

At least twice per year, refold the linen to prevent continued stress on one area. Try to use your precious linen regularly so that you can enjoy its beauty, rather than just leaving it in the closet.

The development of alternative energy has to go hand in hand with a reinforcement of the electrical grid, otherwise the latter will eventually become so busy and will cap the production to its capacity. Such is the case with Germany’s grid, which is an example of an imbalanced structure of solar and wind energy harvesters on one hand and the outdated grid, on the other.

Following a report from published in the NY Times, we find out the opinion of Oxford University economist Dieter Helm, who stated that “basically, governments have allowed the buildup of wind without thinking through the grid consequences. There are two responses: Stop wasting so much on the rapid development of wind and its questionable economics.

In most cases, the proliferation of alternative energy is done by government subsidies, but these are made without taking into consideration that it’s also necessary to invest in the grid. Up to 100 billion euros ($138 billion) are necessary to upgrade the grid over the next decade.

The projected production capacity, the one that’s been heavily invested in, is not always working at maximum parameters, but when that happens, the companies managing the grid need to put a hold on everything, because there’s too much energy to cope with. For example, when wind blew harder in Germany recently, their usual 5 GW reached 20 GW, and cross-border connection with grids in neighboring countries had to be shut down because they couldn’t handle the spike.

Here is a cheap, environmentally friendly way to help get your washing clean:

Baking Soda is an inexpensive way to boost detergent and bleach performance, soften clothes, clean irons and control suds. It is one of the best things to green your laundry by reducing your dependence on chemicals.

Odors in our laundry are caused by bacteria. They can usually be removed as the detergent molecules break up the bacteria cells. In certain types of water and with some bacteria, the detergent needs a boost to work more effectively.

Baking soda helps to regulate the pH level in the washer water by keeping it from being too acidic or alkaline. By adding 1/2 cup of baking soda to each laundry load, detergents can work more effectively and reduce bacteria.

As a natural mineral, baking soda is less harsh on the environment than synthetic perfumes that mask odors. This also makes it a good choice for those with sensitive skin and allergies.

Once your washing is done use a clothesline rather than the dryer. This saves energy and your laundry will smell fresher.

The amount of water used to produce food and goods imported to developed countries is worsening water shortages in the developing world, a report says.

The report, focusing on the UK, says two-thirds of the water used to make UK imports is used outside its borders. The Engineering the Future alliance of professional engineering bodies says this is unsustainable, given population growth and climate change.

It says countries such as the UK must help poorer nations curb water use.

“We must take account of how our water footprint is impacting on the rest of the world,” said Professor Roger Falconer, director of the Hydro-Environmental Research Centre at Cardiff University and a member of the report’s steering committee. “If we are to prevent the ‘perfect storm’, urgent action is necessary.” The term perfect storm was used last year by the UK government’s chief scientist, Professor John Beddington, to describe future shortages of energy, food and water.

Forecasts suggest that when the world’s population soars beyond 8billion in 20 years time, the global demand for food and energy will jump by 50%, with the need for fresh water rising by 30%.

But developing countries are already using significant proportions of their water to grow food and produce goods for consumption in the West, the report says.

“The burgeoning demand from developed countries is putting severe pressure on areas that are already short of water,” said Professor Peter Guthrie, head of the Centre for Sustainable Development at Cambridge University, who chaired the steering group.

Embedded in a pint of beer, for example, is about 130 pints (74 litres) of water – the total amount needed to grow the ingredients and run all the processes that make the pint of beer.

A cup of coffee embeds about 140 litres (246 pints) of water, a cotton T-shirt about 2,000 litres, and a kilogram of steak 15,000 litres. Using this methodology, UK consumers see only about 3% of the water usage they are responsible for.

The average UK consumer uses about 150 litres per day, the size of a large bath.

Ten times as much is embedded in the British-made goods bought by the average UK consumer; but that represents only about one-third of the total water embedded in all the average consumer’s food and goods, with the remainder coming from imports.

The UK is not unique in this – the same pattern is seen in most developed countries.